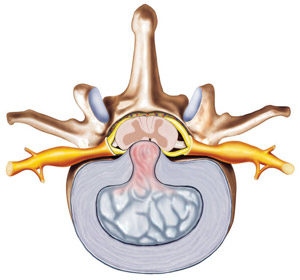 As you may already know, the vertebrae in our spine is cushioned by small discs. The discs are, of course, round and flat, and they’re covered with a tough layer of something called nucleus. The discs are located between each vertebra and their purpose is to absorb shock so that the spinal bones are protected.

Because the discs are found between every vertebra, herniated discs can occur in any part of the spine, but they’re most common in the lower back and the neck.

The main cause of herniated discs is excessive strain or trauma. However, discs also degenerate naturally with age as the ligaments begin to weaken. This makes it common among the elderly to sustain slipped discs or herniated discs, especially in relation to a younger demographic. A genetic predisposition to herniated discs is also possible, making some people more vulnerable to disc herniations than others.

A neurosurgeon will be able to diagnose your herniated disc by looking at your medical history, symptoms, by performing a physical examination, and also through certain tests, including X-rays, Computer Tomography Scan, also known as a CAT or CT scan, an MRI, myelogram, and electromyogram or Never Conduction Studies.

Herniated discs can be treated non-surgically or surgically, depending on the severity of the injury. Non-surgical treatment includes pain medication, rest and avoiding any strenuous activity, and physical therapy.

If the pain is too great to handle, an Epidural Steroid Injection can be considered if pain medication and rest is not making a great difference.

When all else fails, surgical treatment includes lumbar microdiscectomy, which is a procedure where the herniated part of the disc and any other fragments that are pushing on the spinal nerve are removed.

This procedure involves the use of a surgical microscope and micro-surgical techniques to reach the lumbar spine. The microscope is used to magnify and illuminate the area, and in these cases only a small portion of the herniated disc is removed.