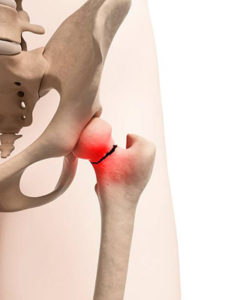 To understand hip fractures, it’s important to understand the relevant elements of human anatomy. The hip is a spheroid joint, also known as ball-and-socket, which is a kind of synovial joint where the femoral head is the ball, and the acetabulum is the socket. This joint is fully covered by an articular surface which is what allows it to move freely and without pain.

A hip fracture is an injury suffered in the upper part of the femur (thigh bone) that causes a crack very close to the hip. The thigh bone itself has two bony protrusions at the top, the greater and lesser trochanters. Hip fractures commonly occur right between these bony processes or just under the lesser trochanter.

A hip fracture is a common occurrence among elderly people because their bones are weaker, and their risk of falls are greater. This leads to the potential for a minor bump or trauma to lead to a fracture or further compromise the hip joint. That being said, people of all ages are susceptible to a hip fracture if a traumatic fall or force is sustained. In addition to sudden trauma, there are certain factors that increase the risk of hip fractures, such as long-term use of certain medicine, smoking, calcium deficiency, osteoporosis, underweight, and lack of exercise.

The are many symptoms that are telltale signs of a fractured hip, such as:

You and your physician will discuss any recent injuries or falls, perform a physical exam, and request an X-ray exam to diagnose the hip fracture. There are other tests, most commonly the Magnetic Resonance Imaging (MRI), that can also help the doctor detect this kind of fracture.

Hip fractures can be different according to which area of the femur was affected, so your physician will classify them as one of these three injuries:

It’s possible to correct and align hip fractures with both non-surgical and surgical methods. Through various manipulation efforts, doctors will make sure the fractured bones are properly aligned and protected so that the body can conduct its natural healing process.

Traction is the main non-surgical treatment option and it’s the most common option for patients who don’t qualify for surgery.

Skeletal traction is another correction method that involves the insertion of screws, wires and pins into the femur, as well as the use of a pulley system with weights. For this procedure, local anesthesia is applied, and the heavy weights are meant to realign the bones until the hip fracture is healed.

External fixation and intramedullary fixation are other surgical methods that can correct hip fractures with the use of screws and plates.