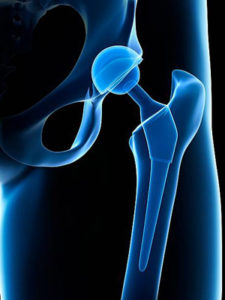 The hip joint is a ball-and-socket joint that’s formed by the femoral head and the acetabulum. In other words, the ball of the thigh bone fits into the socket of the pelvis bone, forming the hip.

This procedure is an alternative to total hip replacement surgery, which consists in removing the joint and replacing it with a prosthetic made of plastic, metal or ceramic.

Hip resurfacing might be recommended to you by your surgeon if you’re suffering from severe arthritis and it’s affecting your quality of life. If you don’t find relief with non-surgical treatments such as physical therapy, pain medication or injections, surgery is the next option.

This kind of surgical procedure requires the patient to be under general or spinal anesthesia. Hip resurfacing consists in making an incision over the thigh to reach the hip joint. Then, the femoral head is displaced from the socket, the damage is trimmed and then it’s fitted with a metal cap. Next, the damaged bone and cartilage lining are removed, and a metal cup is fixed in there. To finish, the femoral head is positioned once again into the socket

Hip resurfacing surgery is performed with the patient under spinal or general anesthesia.

Your surgeon makes an incision over your thigh to locate the hip joint. The femoral head is displaced from its socket, trimmed of the damage using special instruments, and fitted with a metal cap. The damaged bone and cartilage lining the socket is removed and a metal cup is fixed. Finally, the femoral head is re-positioned into the socket, and the incision is closed.

Hip resurfacing has many advantages. First of all, this kind of procedure is easier to revise because it involves less bone removal than other surgical options, and revision is done 10 to 20 years after the fact.

Hip resurfacing also presents lower risk of hip dislocation. Because the ball size is larger and more alike the normal size, the risk is much lower.

The disadvantages of hip resurfacing include the possibility of femoral neck fracture, which will eventually lead to total hip replacement, as well as the risk of an allergic reaction to metal.

Because the metal ball will rub against the metal socket, tiny metal particles can be produced with movement, and may produce an allergic reaction which is accompanied by pain and swelling.

Additionally, hip resurfacing is a difficult procedure, so there’s the risk of complications such as formation of blood clots, infection, dislocation, and femoral neck fracture.

Working with an elite surgical team will always give you the best chance of experiencing significant relief from hip resurfacing, while also limiting the potential for risks.