Normal Anatomy of the Hip Joint 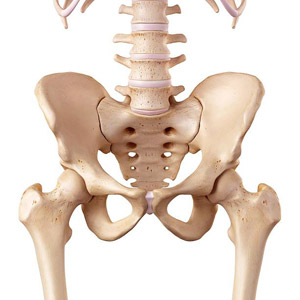 The hip joint is formed by the thigh bone (the femur), the pelvis and the acetabulum. The hip is a spheroid joint, also known as ball-and-socket, which is a kind of synovial joint where the femoral head is the ball, and the acetabulum is the socket.

The acetabulum is a cup-like depression that’s found in the lower and outwardfacing side of the pelvis and the cavity is deepened by the acetabular labrum. On the other hand, the head of the femur is hemispherical, and it fits perfectly into the acetabulum.

The articular surface offers cushioning to the joint and it allows the bones to move on top of each other smoothly and without friction. This cartilage doesn’t show up on X-ray, which is why you can see a space between the femoral head and the acetabular socket.

To fully understand the normal anatomy of the hip joint, it’s important to look at each bone separately.

The pelvis is one of the largest bones in our bodies and it has a flat, irregular shape. The pelvis expands at either end and narrows at its center. This bone is formed by three different parts, the ilium, the ischium, and the pubis.

The acetabulum, the hip socket as you know, is found on the outer surface of the pelvis and it joins with the head of the femur to form the hip joint.

The femur, as you may already know, is the longest bone in our bodies and it joins to the pelvis to form the hip joint.

The hip joint is a ball-and-socket synovial joint that’s formed by the acetabulum (socket) and the head of the femur (ball). The femur is what connects the lower limb to the pelvic girdle, which is why it can provide stability and bear the weight of our body. For this reason, the femur doesn’t have much of a range of motion.

The ligaments of the hip joint can be categorized into two groups: intracapsular (inside) and extracapsular (outside).

There’s only one intracapsular ligament and it’s found at the head of the femur. This is a smaller ligament that runs from the hip socket to the top of the femur. In addition to providing the hip with stability, this ligament as protects a key vein that acts as a source of bloodflow to the hip.