Normal Anatomy of the Spine 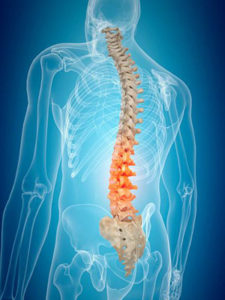 The backbone, or spine, is the most essential structure in human anatomy. The spine provides our bodies with stability, range of motion, and perhaps most importantly it keeps the major nerve root, the spinal cord, protected from pressure and outside trauma.

The spine is primarily composed of a series of 33 small bones called vertebrae. Each one separated from the others by a layer of fibrous, shock-absorbent, spongy tissue known as intervertebral discs.

This system of vertebrae and intervertebral discs form an S-shaped column that begins at the base of the neck and extends all the way down to the tailbone.

The spine is divided into five sections. The first section is called the Cervical Spine, and it is made up of the top 7 vertebrae at the neck. The next 12 vertebrae (in upper to mid back) are known as the Thoracic region of the spine. The Lumbar spine is composed of the 5 vertebrae in the lower back. Beneath these three main sections of the spine, lie the remaining two sections and 9 vertebrae in the Sacrum and Coccyx respectively.

Each individual vertebra is made up of two primary components; these are Vertebral Body and the Neural Arch. With the exception of the first and second cervical vertebrae, which have a slightly different structure, the remaining vertebrae all follow the same structural pattern. Each one has two vertebral laminae, two pedicles, one spinous process, two transverse and four articular processes.

The laminae form the arch itself, while the transverse processes branch out from the side. The pedicles act as anchors to which the surrounding musculature is attached, and through which movement is possible. The spinous process lies directly beneath the skin and can be felt as slight bumps all the way down the middle of the back.